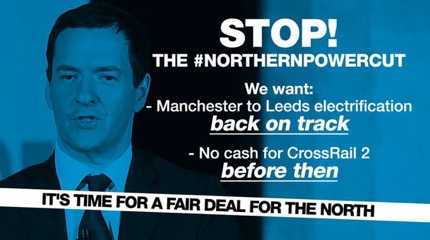 The Manchester Evening News are calling for a firm commitment to completing the electrification project and – at a time when 92% of all transport network spending is in the south east – an assurance that London’s Crossrail 2 plans won’t take priority over northern rail electrification.

Jeff Smith: “If the Chancellor is serious about his wish to see a northern powerhouse, then the pause in plans for the electrification of the TransPennine route from Manchester to Leeds must be reversed. I raised this issue in Parliament earlier this week and I welcome the MEN’s campaign to stop the #northernpowercut.”

You can keep up to date with the stop the #northernpowercut campaign on the Manchester Evening News website.