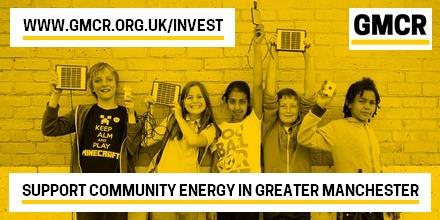 The Greater Manchester Community Renewables share offer hopes to encourage local residents to invest in the city’s sustainable future.  Through buying shares, residents will become members of GMCR and receive interest payments according to the performance of the scheme.  The repayments are projected to be 3.5% in 2018, rising to 5% in 2024.

The project is currently aiming to put solar panels on three primary schools and a community building in Greater Manchester.  It’s estimated that these installations will generate 100,000 kWh of clean electricity each year, saving around 50 tonnes of carbon dioxide in the first year alone, while any surpluses will go towards other eco-friendly projects around the city.

Commenting on the scheme, Jeff Smith said: “This is a very worthwhile community venture, which will hopefully contribute to Greater Manchester leading the way in community-led renewables projects.

This share offer is a way to give Manchester residents a stake in the sustainable future of our city, but it will depend on the community getting involved and becoming part of the project.

I am pleased to promote Greater Manchester Community Renewables and I‘d encourage residents who are interested in investing, and supporting renewable energy, to check it out’