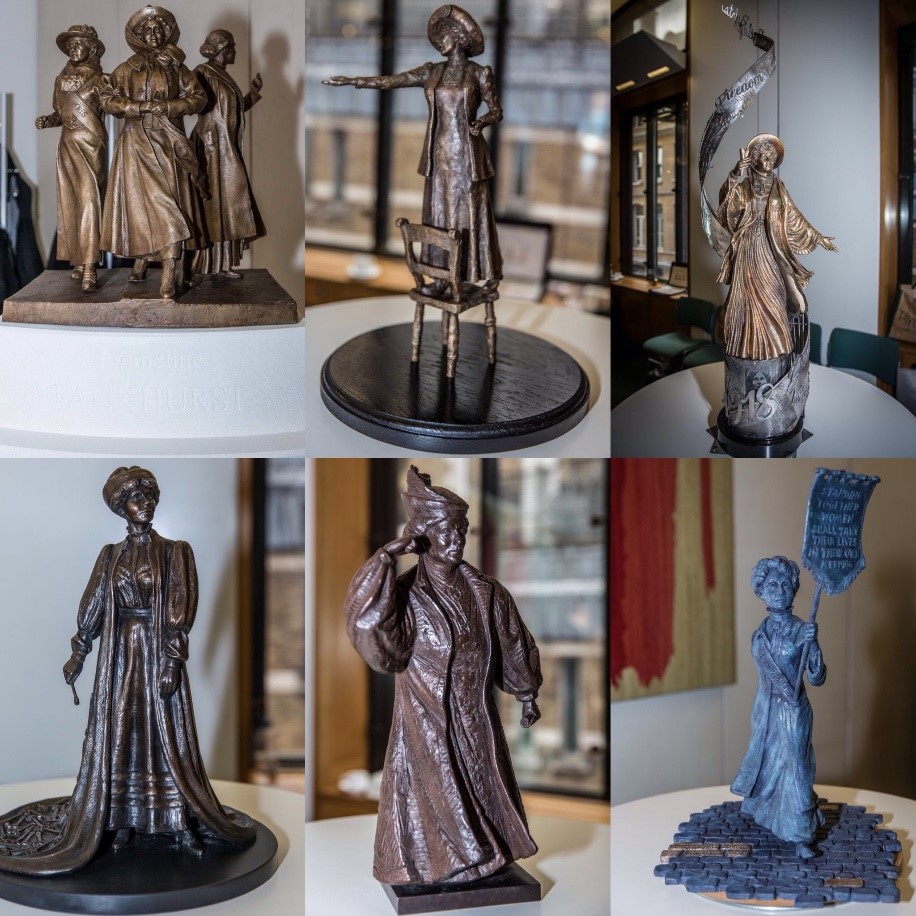 The vast majority of statues around the UK are of men and Manchester currently has no statues of women other than Queen Victoria. Thanks to a great local campaign, that’s about to change.

Manchester Councillor Andrew Simcock launched the ‘WoManchester’ campaign to build a statue of a ‘woman of significance to the city’ in 2014. A shortlist of 20 noteworthy women was drawn up that included novelist and social reformer Elizabeth Gaskell, birth control pioneer Marie Stopes, mathematician and former Lord Mayor of Manchester Kathleen Ollerenshaw, and sisters Christabel and Sylvia Pankhurst.

It was Sylvia and Christabel’s mother, Emmeline Pankhurst, who emerged as the overwhelming choice of over 5,000 people in a public poll. Born in Moss Side in 1858, the leading suffragist and founder of the Women’s Social and Political Union was known for her dedication to “deeds, not words” in the campaign for universal women’s suffrage.

The maquettes of the six shortlisted sculptors were brought to parliament to be viewed by MPs, collectors and members of the public.  Following the event, the six models are being auctioned off, with the proceeds going towards the construction fund for the statue itself.

The project is at no cost to the taxpayer, with Councillor Simcock commencing fundraising with a 1,059 mile cycle ride from Lands’ End to John O’Groats in June 2015.  The campaign is also welcoming donations from individuals and organisations who would like to pledge to the construction fund.

Commenting on the campaign, Jeff Smith MP said: “Like most cities, Manchester has not done enough to recognise the contribution that women have made in creating the society we live in today. I’m delighted to support the campaign to change that.

Emmeline Pankhurst is a worthy winner of the public poll, and it was fantastic that Helen Pankhurst joined us in parliament to celebrate her great-grandmother’s remarkable life.”

Councillor Andrew Simcock said: “All the sculptors have been working hard on their maquettes of the Emmeline Pankhurst statue and I am delighted that we had a full house at the Houses of Parliament for the unveiling.

Helen Pankhurst said: “This moment, the Houses of Parliament unveiling, is a symbolically important one as part of the build up to the centenary celebrations of the one hundredth anniversary of women partially securing the vote in 1918.

There is much to celebrate in terms of the progress in women’s rights over the last hundred years.  However, there is also much more to be done, in the social, economic and political spheres.

Emmeline’s demands that we don’t just accept things as they are, but demand more of our institutions, our culture and of ourselves, remains as pertinent today as ever.”

More information on the sculptors and the campaign can be found here.

You can also support the campaign on Twitter, by voting for your favourite on the online poll or by donating to the statue fund here.