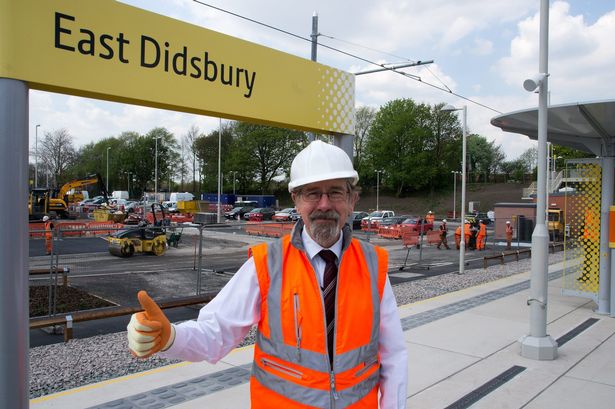 Last night during a debate on Manchester’s Metrolink system, Jeff paid tribute to the career of Councillor Andrew Fender, who will be standing down from Manchester City Council after the local elections in May this year.

Described by this article in the Manchester Evening News as Manchester’s “Mr Metrolink”, Andrew Fender has been a councillor since 1977 and has been a leading voice on transport across Greater Manchester since 1981.

In a career spanning 41 years on the Greater Manchester Council and Manchester City Council, Andrew has overseen many of the city’s transport developments, including leading the campaign for the Metrolink system which opened in July 1992.  He also led plans to freeze bus fares, helping to stabilise falling passenger numbers, and helped revolutionise the road plan for the city.

During the debate on the Metrolink, led by Jim McMahon MP, other tributes were paid to Andrew Fender’s work.

“Councillor Fender has been a real transport inspiration for many people in Greater Manchester.

I have absolutely no doubt that without the time that he put in to transport in Greater Manchester—not just the tram system but the bus network, and cycling routes especially—it would not be as advanced as it is.”

“I pay tribute to Councillor Andrew Fender for the work that he has done over the past 41 years. Opinion is divided in Manchester as to whether he should be regarded as Mr Metrolink, or just Mr Transport. Whichever it is, we congratulate him,”

Jeff said after the debate:

“Over more than four decades of public service, Andrew has played a central role in transforming our city.

Of course, he will be known to the region as the man who oversaw the creation of the Metrolink system and guided transport policy in Manchester for decades.

However, he is also one of the most popular and well-respected members of our community in south Manchester. He has been an outstanding Councillor for Old Moat, and I’m privileged to have worked closely with him for over 20 years.”

You can read more about Councillor Fender’s career by clicking here.